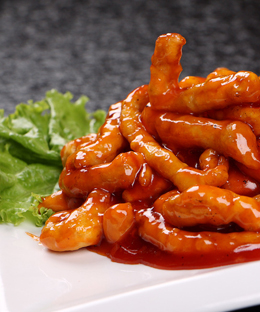 Sweet and Sour Pork Tenderloin is one of the classic cuisines in China. It exists in Zhejiang Cuisine, Shandong Cuisine, Sichuan Cuisine and Guangzhou Cuisine. Sweet and Sour Pork Tenderloin of Shandong Cuisine is the most famous one. Pork tenderloin is the main material of this dish. The meat will be mixed with flour and starch first, and then be deep-fried in the hot oil till its surface becomes golden. Then stir fry the meat and the prepared sweet and sour sauce till completion. The dish tastes sour and sweet, but also crispy outside and soft inside, which can stimulate people’s appetite. You can eat this dish at most of the Chinese restaurants. 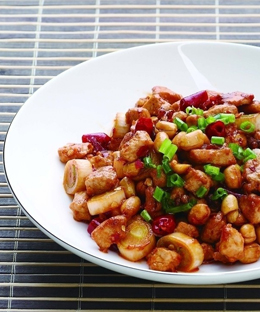 Kung Pao Chicken is a classic dish in Sichuan Cuisine. This dish uses chicken as its primary ingredient, and other ingredients include peanuts, cucumber and chili peppers. The diced chicken will be mixed with prepared marinade first. Then, add some oil into the wok, and then add some chili peppers and Sichuan peppers into the oil to flash fried them to increase the fragrance of the oil. And then, stir fry the chicken and vegetables, and at last, add some peanuts. This dish tastes a little spicy. However, the flavor is not fierce. The chicken meat is very fresh and smooth. 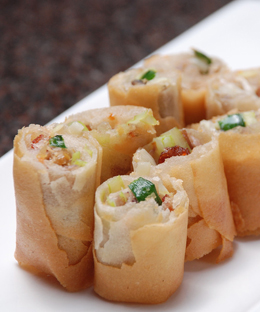 Spring Rolls are traditional food of China. They symbolize wealth and prosperity, since their color and shape are similar to a gold bar. To make the skin of the Spring Rolls, you need to bake the dough (which is made with white flour, salt and water) to circular and thin skin. Then, put the fillings (which are normally made with ground meat or red bean paste) on the skin and fold the two ends and roll it into strip. At last, deep-fry the rolls in hot oil till its skin becomes golden. The skin of the Spring Rolls is crisp and the fillings are tender and fragrant. 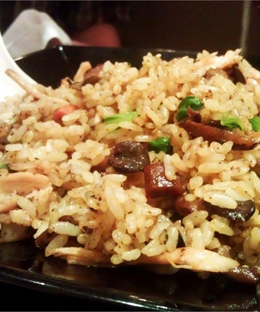 Fried Rice is a very popular and easy cuisine in China. There are many kinds of Fried Rice, and different Fried Rice will add different meat, vegetables and seasonings. The best rice for Fried Rice is overnight steamed rice. First, add some oil into the wok and put the meat into the hot oil to fry for a while, and then add vegetables into the wok. When the ingredients are 80% cooked, add the rice and seasonings. As a homemade dish, Fried rice is typically made with leftover ingredients (including vegetables and/or meat) from other dishes, thus you can make countless variations of Fried Rice. 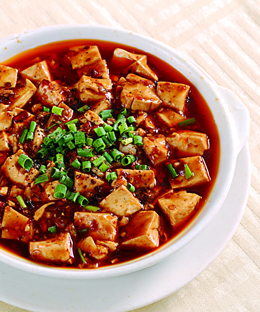 Mapo Tofu is widely popular throughout China and it belongs to Sichuan Cuisine. The name of the dish is named after a freckled woman (in Chinese we call “Mapo”) who was famous for making delicious stir-fried tofu in Chengdu. The main ingredients are tofu, ground beef/pork, chili peppers and Sichuan peppers. A secret of this dish is quick boiling the diced tofu before stir-frying them. When the oil is hot, add the ground meat to fry for a short time, and then add some thick broad-bean sauce and shallot to increase the fragrance of the meat. At last, put some hot water into the wok and put the diced tofu in the soup to boil for about 3 or 4 minutes. When serving the dish, spill some Sichuan pepper powder on it. This dish tastes tender and spicy but not pungent. 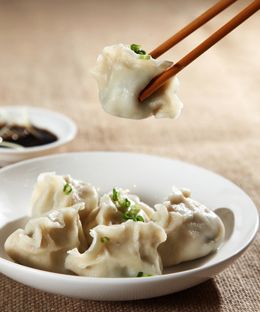 Jiaozi is also called “Chinese Dumpling” in western, and it’s a typical Chinese food and often consists of a ground meat and/or vegetables filling wrapped into a rolled piece of dough, which is then sealed by pressing the edges together or by crimping. Jiaozi is one of the most important foods in Spring Festival. Since the shape of Jiaozi is similar to ancient Chinese gold or silver ingots, they symbolize wealth. Traditionally, the members of a family will get together to make Jiaozi during the New Year's Eve. They may hide a coin in one of the Jiaozi. The person who finds the coin will likely have a good fortune in the New Year. Jiaozi is a delicious food, and you can make a variety of Jiaozi using different fillings based on your taste. 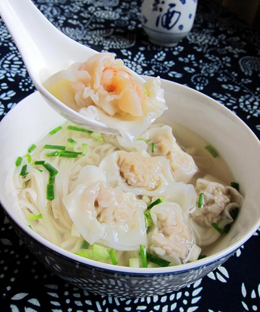 To make a wonton, spread a wrapper flat in the palm of one hand, place a small amount of filling in the center, and seal the wonton into the desired shape by compressing the wrapper's edges together with the fingers. The filling of wonton is usually pork or shrimp meat, and the filling is seasoned with salt and spices. In some place, people will also add some garlic or finely chopped green onion in it. The differences between Jiaozi and Wonton: the wrapper of Wonton is thinner than Jiaozi’s, and Wonton is more focus on the soup base, while Jiaozi is more focus on dip sauce. The soup of wonton is very fresh and light. This dish is very common in Chinese restaurants and it’s convenient for you to eat it. 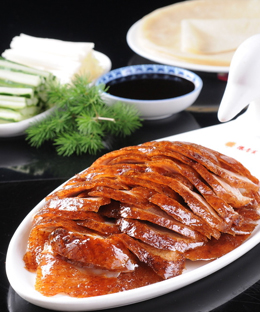 Roast Duck, or Peking Roast Duck, is a famous duck dish from Beijing that has been prepared since the imperial era, and is now considered one of China's national foods. The ideal duck used to cook this dish is forced-fed duck, for this kind of duck can grow very fast and have more subcutaneous fat. The fueling wood should be fruitwood. The duck will be pickled for a while and then be roasted. The finished roast duck has a very crispy skin. In an authentic roast duck meal, the duck will be sliced in front of the diners by the cook, and the dish is mostly served with skin and little meat. The duck meat is usually eaten with pancakes, spring onions and hoisin sauce or sweet bean sauce. 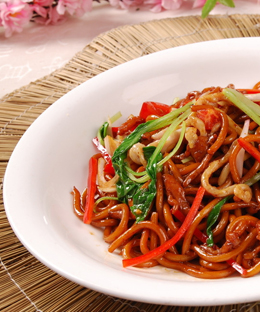 Chow Mein is a Chinese term for a dish of stir-fried noodles, and like Fried Rice, Chow Mein have many varieties due to different meat and vegetables used in the dish. To cook Chow Mein, you need to boil the noodle first, and then flush the noodles with cold water. Add some oil into the hot wok, after the oil is heated, put the prepared meat to stir fry for a while. Then season the meat by adding some seasonings and vegetables. At last, add the noodles into the wok and stir fry for a short time, now you can serve the dish. This dish is very easy and thus, it’s very popular in Chinese family and foreign tourists. 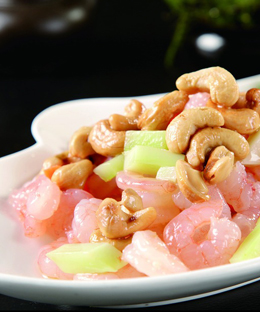 Sautéed Shrimp with Cashew Nuts is a popular home-cooking dish in Guangdong. With its great look and taste, the Sautéed Shrimp with Cashew Nuts always takes the cake among people’s favorite dishes. The refreshing fruit, along with tender shrimp and crispy cashew nuts are three key elements for cooking the dish. The shrimp needs to be stir with egg white, salt, cooking wine and starch for a while before cook it. First, you deep-fry the cashew nuts and then put them aside, and then stir-fry the shrimp for a while and put them aside. At last, put some oil and all seasonings into the wok, and add the cashew and shrimp to stir fry for a while. This dish has extraordinary nutritional value. Rich protein and microelement make this dish a very popular and healthy food among people.

8 Things You Shouldn't Do When Visiting Your Partner's...

The Chinese New Year, you're not only making your first appearance at your significant...