Whether you travel to China frequently for business or you’re moving to China as an expat with a residence permit, opening a bank account in China has many benefits. This article has been expanded and updated to include the experiences of other foreigners, so make sure to read through carefully, especially the frequently asked questions section. I hope you enjoy this guide to help you open a China bank account.

To open a bank account in China requires time, but overall it’s not particularly complicated. The key is finding a bank branch that has experience working with foreigners and that is willing to accept your particular visa/resident’s permit,etc.

Personally I have opened accounts with Bank of China (中国银行) and the Bank of Communication (交通银行), but I’m not here to promote one bank over another. There are plenty of other good China banks including, but not limited to:

For the average person, there’s not a huge difference between these banks, so I recommend choosing yours based on convenience. Which branches and ATM’s do you see most often in your city or near your neighborhood?

*Special Note* For those opening a foreign business in China, your choice of bank makes a much greater impact on you than as an individual. I recommend you contact a lawyer or specialist before deciding where to open a bank account in China.

Also, are you not sure if you need to open a bank account in China? Consider this: if you want to buy train tickets online, set up your phone to pay with WeChat, or do any sort of online shopping on Taobao (China’s Amazon-like marketplace), you must have a local bank account.

Before I dive into the “how-to” of opening a bank account in China, I first want to cover a few reasons not to open one.

It’s worth noting that it’s virtually impossible to open a bank account in China remotely. You’ll need to be physically present in the bank in order to open an account.

How to Open a Bank Account in China (3 Steps)

If you still feel inclined to open a China bank account, here are a few simple steps to follow.

Keep in mind that for most expats or travelers going through this process of opening a Chinese bank account, it takes a few hours – and sometimes a few days. There are many reasons for this, but what you need to know is that it’s good to budget a good portion of time to get this done.

Arrive at the bank the moment it opens in the morning to see if you can avoid waiting in line.

Follow these three steps and (hopefully) in no time you’ll be walking out with your very own China bank card.

Preparation can be broken down into two simple categories: choosing your bank and gathering the appropriate documents.

WHICH CHINA BANK SHOULD I CHOOSE?

As I mentioned earlier, the most important factor to consider when choosing your bank is convenience. Bank of China is the largest in China, but personally I don’t keep most of my funds there because there isn’t a branch or ATM immediately near my home.

Also, your account is tied to the specific branch in which you open it. So if you need to change your PIN, report a stolen card or something of this sort you’ll need to go back to that exact branch. Another reason to pick one near you.

IMPORTANT: Not every China bank – or China branch for that matter – will allow a non-Chinese person to open an account. Many travelers and expats have reported to me that they’ve had to go around to 5-10 different bank branches until they found one that would allow them to open an account.

WHAT DO I NEED TO OPEN A CHINESE BANK ACCOUNT?

There are a few things that you’ll need in order to open a bank account in China:

All application forms will be given to you at the bank where you will need to take a few minutes to fill it out.

The bank will require at least 10-20 RMB for an initial deposit and some banks might make you pay for the card they give you. I recommend you bring at least 40-50 RMB with you (if not more) as a precaution.

Once you’ve picked the bank and put your passport and cash in your pocket, set aside an hour or two and head over to the nearest bank branch.

If you have a local Chinese friend that can accompany you, this might help speed up the process. It’s not necessary, however. You should be able to do this by yourself (if you’re adventurous enough!). As I’ve said before, it’s possible to travel in China without speaking Chinese, and it’s also possible to open a bank account in China in the same way.

The first place you need to stop is the information desk to speak with the staff and get a wait number. Tell them that you are opening a new account and often they can help you fill out the form.

Sometimes the bank account application form they give you is in both English and Chinese, but that’s not always the case. Either way, unless you’re confident can write your address and information in Chinese characters, the staff is usually able to help you.

They’ll also likely go make a copy of your passport and visa that you’ll need later.

When your number is called, provide them with your passport and the form. They’ll have you sign a few other documents, tell you how much money is required for deposit and hand a new UnionPay Bank Card. 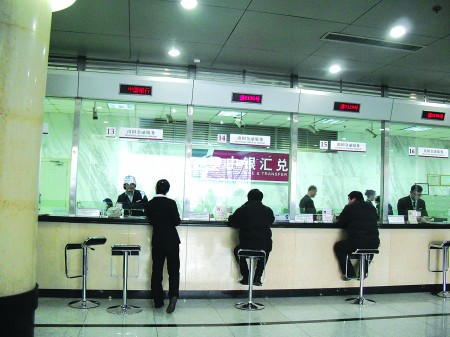 At some point during the process a small keypad next to you will light up and scream at you to input a password. All China bank passwords are 6 digits long and you’ll probably have to input it a few times while you’re there.

That’s it! You should walk away immediately with a new card (it won’t have your name on it) and a lot of stamped paperwork.

There are a few different ways you might find yourself using your new China bank account and your UnionPay card, and each might require specific actions.

As simple as I just made opening a bank account in China sound, as with all things, the devil is in the details.

Here are the most common questions that I receive about banking in China.

Can I open a joint bank account in China?

No, you can’t. Chinese banks don’t do joint accounts like you find elsewhere in the world. Only one name is allowed to be on the account and only one UnionPay card can be tied to that one account.

If you’re wanting to share an account with your spouse or significant other, you’ll also need to share a bank card. It’s annoying, but that’s the way China does it.

Can I open a Chinese bank account on a tourist visa?

Ummm…maybe. But don’t count on it.

Even if it’s possible for you, don’t expect it to be easy. I received feedback from one reader named Sean who shared his experience with me: “After trying a number of different bank branches, always pretending it was my first try, a China Construction bank allowed me to open an account on a tourist visa. When everybody else rejected me, more than a few banks explained that it wasn’t specifically the tourist visa that was a problem, but that you’d need to be stamped in for a visit with a minimum of six months.”

Based on his experience and many others I know, persistence (and time) is key to opening a Chinese bank account on a tourist visa. You’ll probably be told that it’s “not possible” or “against China regulations now” and yet…it still happens.

Can I open an account in my country and use it in China?

In some cases, there are China bank branches in other countries, such as the Bank of China branch in New York City. Although it would seem logical that you could open an account in the New York City branch, deposit money and then use that account in China…it doesn’t work that way.

Accounts outside China only work when connected to an account opened within China. The bottom line is that you’re going to need to open a bank account from within China. Sorry.

Do I need a China bank account in order to wire money in China?

Yes and no. It is possible to wire small amounts of money or use Western Union / MoneyGram to transfer money into China. To transfer money out of China, you are required to provide proof that taxes have been paid on the money and this, in turn, is verified by a China bank. You’ll need to have an account of your own.

In both cases, you need to bring all your documents with you to wire money, particularly your passport.

Can I use my UnionPay card outside of China?

Technically, you’re supposed to be able to. In my experience, though, my UnionPay card is only valuable throughout Asia. The same goes for using mobile payment systems tied to my card (such as WeChat or Alipay).

Hopefully that answered most of your questions about how to open a bank account in China. With the right documents, I was able to open an account in less than an hour, but I’ve known some people who have spent days trying to get things sorted out.

Be patient – the Chinese system has never been known for being efficient. ????

Also, remember that you might find that you don’t need to go through the hassle of opening a Chinese bank account if something like ECARD solves the problems you’re having. It’s worth investigating more. It’s been a great solution for me personally.

Where Western social media is mostly blocked, WeChat is the giants of social messaging...