Chinese food is famous all over the world, but you may be shocked by its surprising range and variety of ingredients if you’ve only eaten in Chinese restaurants abroad. Chinese food has countless delicious and fantastic dishes. And people from different areas have different cuisine types, which can be bland, sweet, salty, spicy, or sour.

China can be divided into several regions with distinct styles of cooking. The ingredients used are based on the natural and agricultural products of each region. 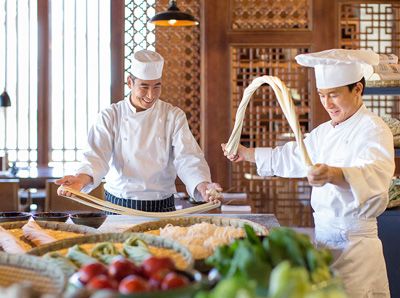 Northern China food is generally more acceptable to Westerners. Enjoy roast duck from Beijing's imperial kitchen, beef and dairy from Inner Mongolia, flatbreads and roasts from the Muslim northwest, and Korean dishes in the northeast.

A strong flavor is very important for Northerners, who achieve this with salt and strong seasonings, compared with the South where chilies and pickles are more used, or dishes are lighter in flavor. Generally, northern dishes are oilier and richer in meat, and make liberal use of garlic and scallions.

The most popular seasonings used are soy sauce, vinegar, garlic, scallions, ginger, leeks, star anise, sweet bean sauces, chili peppers, and sesame oil. Northern chefs skillfully make use of seasonings to add richness to its dishes without covering up the natural flavor of the ingredients.

Western China food is mainly Xinjiang Province and Tibet. The food reflects the characteristics of the culture, geography, climate, and agriculture of this region.

The region of Xinjiang in northwest China is traditionally home to ethnic Muslim peoples like the Uighur (pronounced wee-ger), so there is no pork or carnivorous animals on the menu. Being a region with lots of pasture, sheep features on top of the menu. Xinjiang is also famous for its fruit, particularly dried fruit.

Xinjiang is mostly composed of deserts and mountains, so arable land is limited. Wheat is the main staple grain, and a few vegetables are grown there, mostly onions, carrots, peppers, eggplants, and tomatoes. Xinjiang is also famous for its fruit, particularly dried fruit.

Being a region with lots of pasture, Xinjiang cuisine features mutton top of its ingredients list. Other protein foods include beef, camel meat, horse meat, and various dairy foods.

Xinjiang is a multi-ethnic area, so the diet of this region varies with ethnic customs, beliefs, and ways of life. There is Uyghur cuisine mainly, but also Han, Kazakh, Russian, Tibetan, etc. The common cooking methods include stir frying, roasting, and steaming.

Eastern China food is the food of the Yangtze Delta area — Shanghai, Hangzhou, Suzhou, Nanjing, the Yellow Mountains… — and as far south as Xiamen.

An Abundance of Ingredients

Eastern food features an abundant use of seafood, fish, pork, poultry, and vegetables.

The Yangtze River Delta is a fertile region with rich farming land, nourished by the subtropical climate, which allow for production of a wide variety of vegetables. Both rice and wheat are common staples.

The large number of lakes and river tributaries provide abundant fish and shellfish to this region. It also has abundant seafood due to its proximity to sea.

Central China food is hot and spicy with a lot of strong seasonings.

Sichuan food from Sichuan Province, is famous for its particularly numbing and spicy taste resulting from liberal use of garlic and chili peppers, as well as the unique numbing flavor of Sichuan peppercorn.

Hunan cuisine is similar to Sichuan cuisine, but generally even spicier. It has a great variety of ingredients due to the high agricultural output of the region.

Southern minority food is characterized by lots of preserved foods, particularly pickled vegetables and tofu, which give it its sour flavor. The many southern minorities are generally poor mountain farmers who preserve anything they can't eat immediately to prevent wastage. Fresh produce from far away is generally not available in their areas.

The minorities of the South are generally poor to subsistence-level farmers, living on or among the mountains, so their daily food is mostly grown locally, often on their own garden plots. Meat is usually reared at home, bought locally, or caught. Southern ethnic food is typically simple and full of natural ingredients, with little wastage. Heads, feet, and innards are all eaten.

The most significant ingredients of Southern minority cuisine are rural preserved foods. They preserve almost everything to prevent wastage, and have been doing so since ancient times.

Pickling in brine or vinegar, sun-drying, and curing were traditionally the only ways to preserve foods in the damp southern weather. The "mountain peoples" pickle vegetables, tofu, and chilies; smoke meat, poultry, fish, and tofu; and sun-dry fruits, fish, vegetables, and chilies.

The People's Republic of China

The easiest way to order McDonald's delivery. And transfer money and everything...

China is not only one of the largest countries in the world, but also one of the...

The following numbers are the emergency numbers and service numbers most used in...